Jan ’14 The Case for Kaomoji
design

Once upon a time people communicated by writing their emails on paper and putting them in envelopes. We tend to remember these personal letters as being pretty elaborate.

I hope this letter finds you well. It is with a wistful heart that I write you. When it’s raining like this, and we’re together it feels as if we’re the only ones in the world.

The shorter, snapchat equivalent is a tad more ambiguous.

Less is more? Less is less!

While the creation of emoji for Docomo in the 90s has been well told, the history of the kaomoji only really exists in the dustiest corners of the Japanese internet. From what I could piece together (I’m a real archeologist), the first kaomoji was used in 1986 on a disability-related bulletin board.

As you can probably guess, I really like kaomoji.

Sometimes I use them in code comments (mostly to myself):

I’ve snuck them into error messages on stuff I’ve designed: 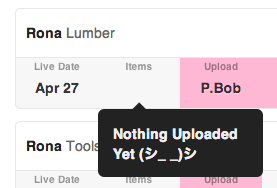 Being expressive and easy to remix, they’re just fun to send. After the apocolypse, it’ll be beetles, .txt files, and kaomoji.

No one’s gonna argue against emoji’s (personally, I’m partial to the snowman). I think there’s a place in the world for both to sex up your correspondence.